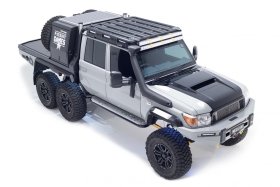 The PCOR Megatourer 6x6 is an off-road touring vehicle. The Australian company can outfit a Megatourer as a standalone camping vehicle.

The vehicle is a heavy modified Toyota Land Cruiser. The modifications include a 6x6 drive, air suspension and portal axles. 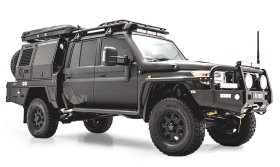 The primary business of Patriot Campers is off-road camping trailers, available in different sizes. Up to a tandem axle version which can be used both as a camping trailer and a toy haulier, to transport bikes and quads.

PCOR is the brand name for trays, canopies and the Super Tourers. The Super Tourers are off-road vehicles outfitted by Patriot Campers. The base vehicles are from Toyota, Ford and Ram.

Top of the line is the Megatourer 6x6, both in dimensions and price.

Patriot campers offers its customers a base vehicle, on which they can add various options.

The base vehicle is a Toyota Land Cruiser 79 dual cab, powered by a 4.5 L V8 turbo diesel engine.

The company built this vehicle to showcase new options, an updated design of the tray and to promote the brand. They had no intentions to commercialise it, give the high price of the vehicle. Patriot Campers changed there mind and builds the Megatourer for costumers.

This vehicle is also a showcase of what the Australian aftermarket industry has to offer for the Toyota Land Cruiser 70 series. It shows what’s possible when a customer wants to spend a big budget on his ultimate off-road vehicle. The various companies which provided parts for this vehicle, partnered in the build. By sharing the cost of the build, they have a spectacular vehicle to promote there products. 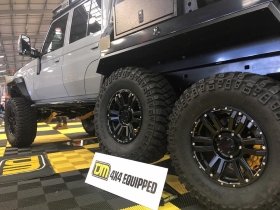 One of the most prominent features is the 6x6 conversion by JMACX, which replaces the rear section of the frame, starting at the back of the cab.

Uprated axles housings and a modified rear suspension are part of this 6x6 conversion.

Another prominent feature is the portal axles. Specialist vehicles like the Mercedes Unimog use this technology. 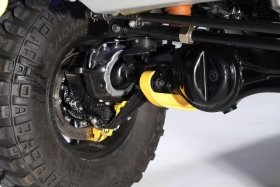 The port axle conversion provides more ground clearance under the axles and gives more space to fit larger tires. Its built-in gear reduction compensates for the larger tires, so the vehicle keeps its low speed pulling power. The portal axles lift the Megatourer by 4 inches.

These portal axles are an Australian conversion (by Marks4wd). They fit both on the original Toyota axles and the heavy duty axles from JMACX. These portal axles have a 150 mm wider track. The diffs in the first and third axle contain the electric diff-locks from Toyota (standard on the GLX version). The second axle does have a Detroit soft locker.

The vehicle has 37” tyres (Mickey Thompson) on 18” rims. The vehicle runs on 37” tyres in the pictures and videos of the introduction. Now it runs on 35” tyres, to make it street legal in Australia on a car drivers license.

Even the disk brakes are upgraded units. (by WP pro) 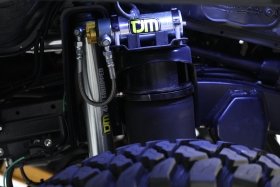 The ride height can be adjusted to suit the driving conditions. Combined with the portal axles (4” lift), it results in an 8-inch lifted vehicle.

The management of the air suspension is electronic controlled and offers the option to control the ride hight. The 4 corners of the vehicle can individually adjusted. The air suspension of the axles 2 and 3 in interconnected. This provides a weight compensation for the rear axles.

The setup was modified after initial tests, during which some air-bags failed. This is sorted out by adding a strap next toe the air-bags, which limits the movement of the axles to protect the air-bags.

The TJM shock absorbers are 8 stage adjustable and have a remote reservoir to cool them down during off-road driving.

It has a small canopy in the front and an open cargo space. Patriot Campers offers other canopy configurations and various options.

A sliding fridge sits inside this small canopy, at the left-hand side of the vehicle. An additional battery pack (from REDARC) and a solar panel provide the power for the fridge.

The tray is the prototype of new a range aluminium trays from Patriot Campers.

The locks of the canopy doors and other storage boxes are connected to the central locking system of the vehicle.

Two cameras give a view of the rear. One is used to assist hitching a trailer, the other one is mounted on top of the canopy and gives a view of the traffic behind the vehicle or the trailer.

Bucket seats replace the factory front seats. The rest of the interior has a new upholstery in black leather and suede, finished with yellow stitching.

A set of clear view mirrors replace the factory ones.

GSL fabrications tuned the Toyota 4.5 L V8 turbo diesel engine. They installed a bigger turbo and a custom 4” exhaust with stacks behind the cab. The engine delivers 260 kW / 354 HP at the wheels.

The exhaust does have a bypass valve, to dump the exhaust gasses underneath the car. This option reduces the noise level in the cab, an useful feature on long trips. 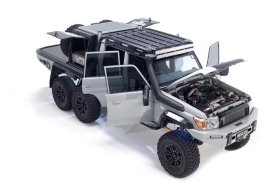 A 185-litre long range tank replaces the factory fuel tank. An 80-litre auxiliary fuel tank sits inside the frame, underneath the cab. The fillers sit at the right hand side, behind a filler cap.

A 70-litre water tank is mounted underneath the tray.

The vehicle has two winches, one in the front and one on the rear.

Twin air-compressors are available to pump up the tyres.

Some modifications where required to make the vehicle street legal in Australia. Patriot Campers did register this vehicle on a car drivers license (max GVM 4500 kg).

Expedition Overland, In The Shop #16 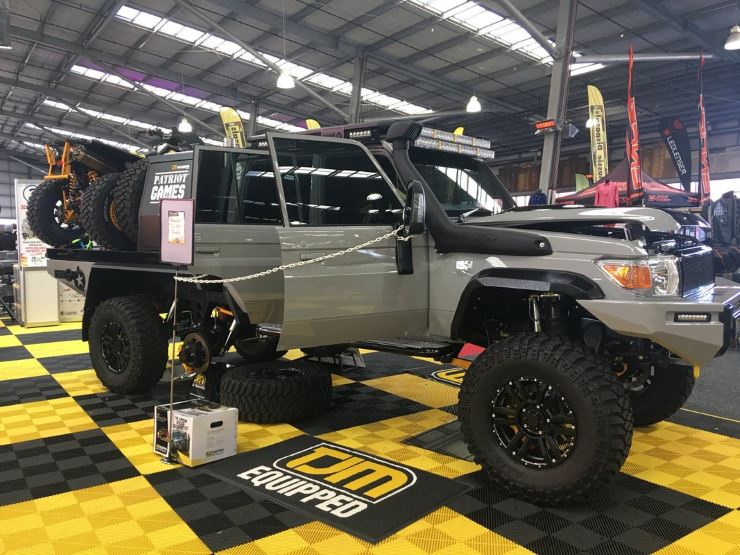 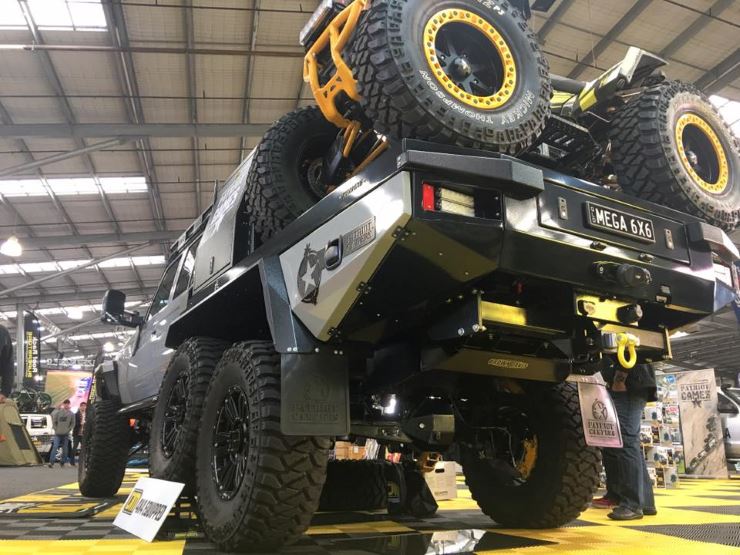 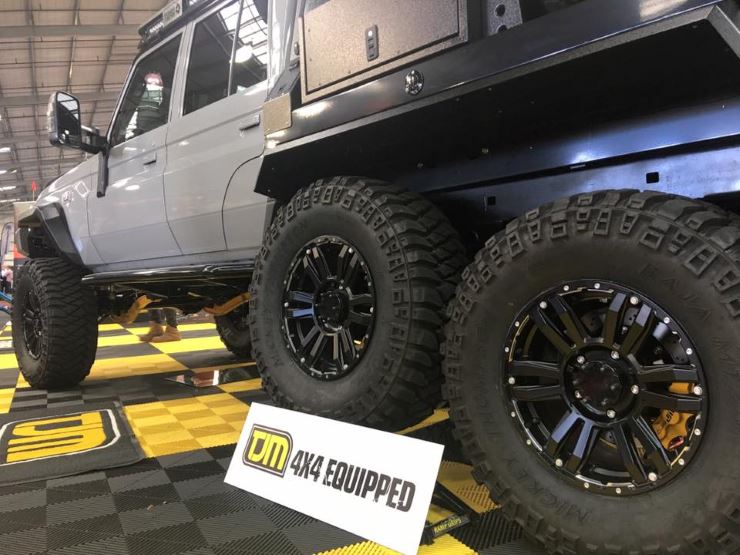 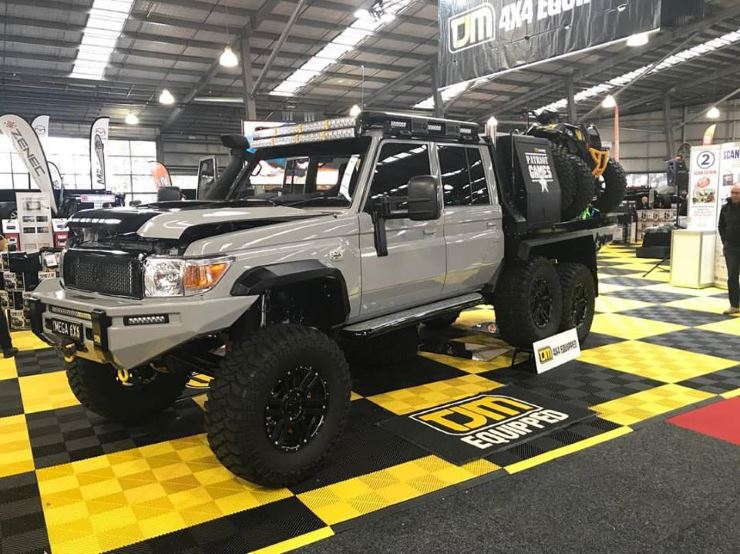 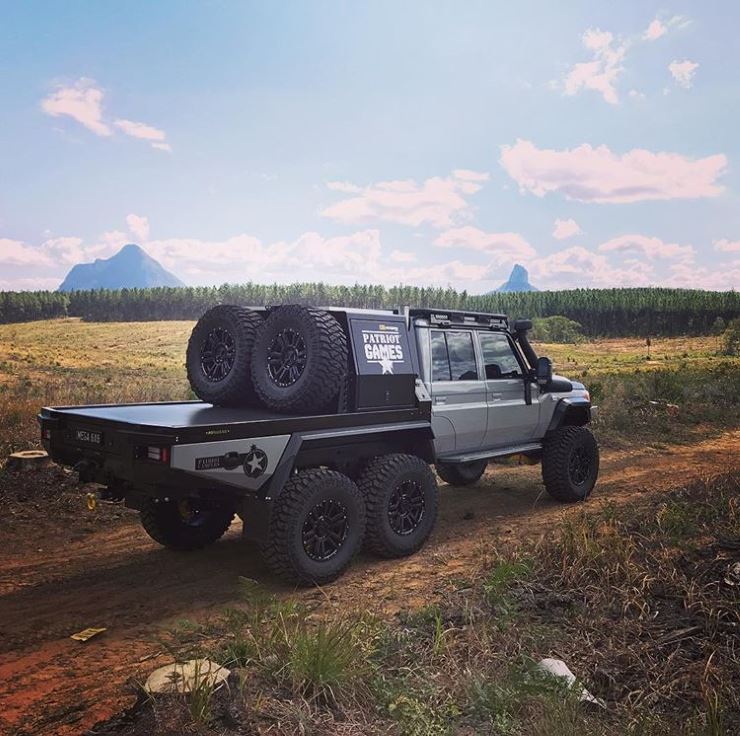 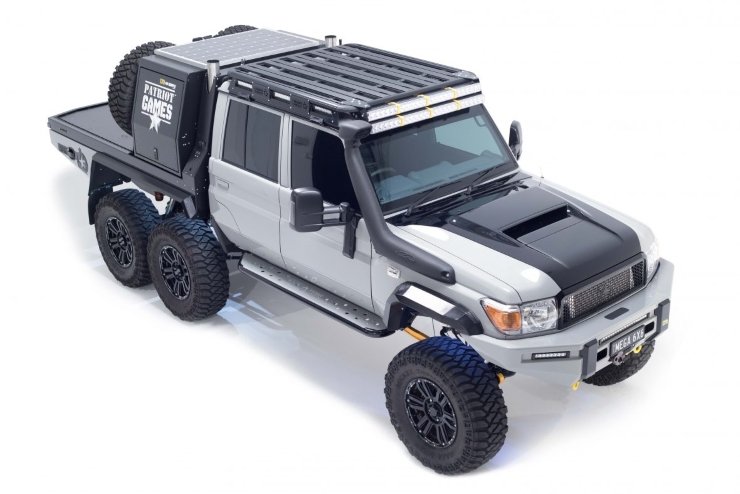 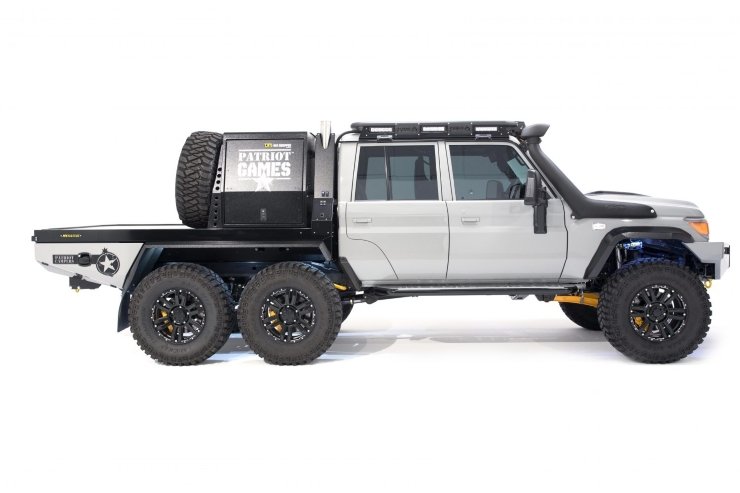 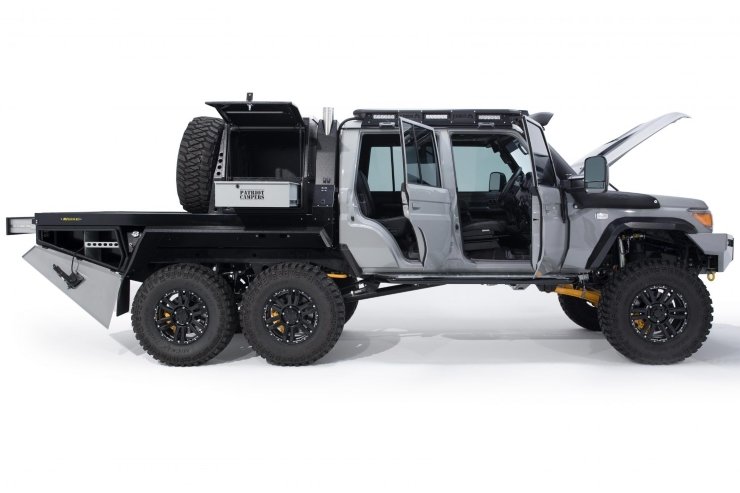 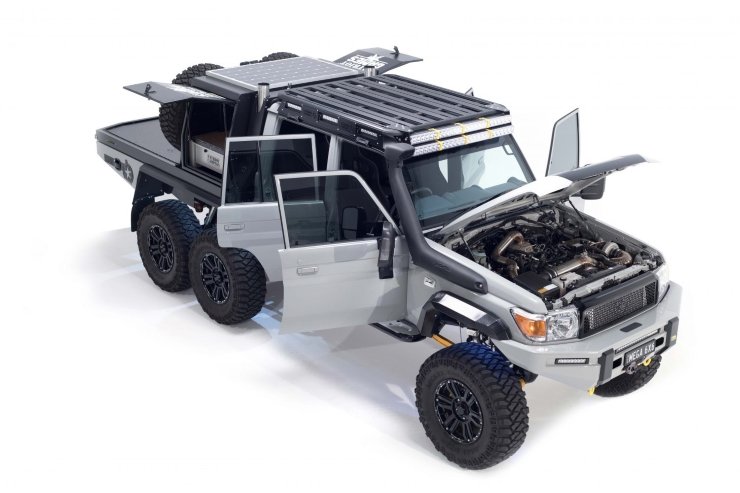 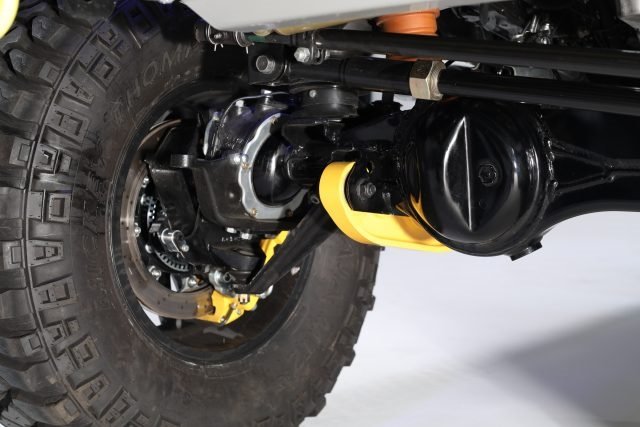 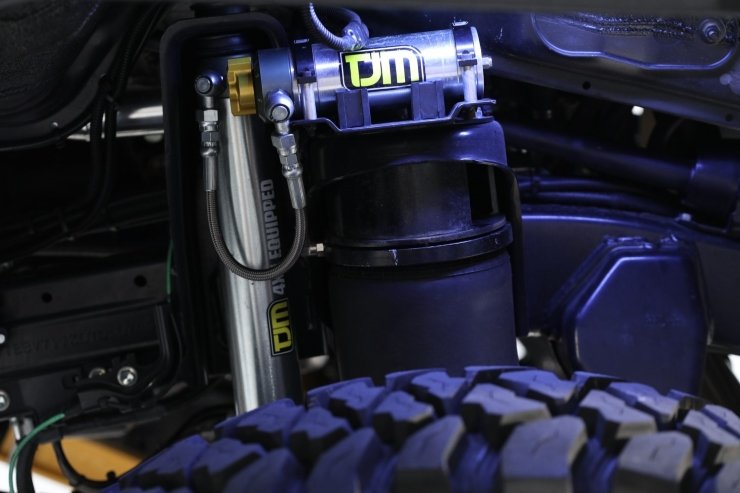