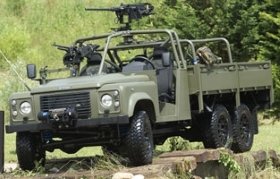 The vehicle does have a custom canvas top cab and a separate bed, which are both wider than the stock Defender. The engine is a 2.4 L Ford turbo diesel, which was the standard engine for the defender in 2007. The rear axle suspension looks identical to the one of the Land Rover Perentie. The first and second axle are permanently driven, the third can by powered by a vacuum operated clutch. (like the Perentie).