Vromos converts the Toyota Hilux into a 6x6 pickup trucks. Both rear axles are driven by a second transfer case and the rear axles have leave springs. 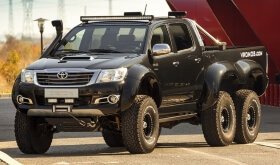 During the conversion, the frame of the Hilux as extended to make space for the third axles.

The second and third axle driven by a second transfer case, which drives the rear axles by 2 prop shafts.

The Youtube channel van the manufacture does also show a test drive of an older Toyota 4 Runner 6x6 dual cab conversion. Given the fact this old generation 4 Runner was based on the Hilux, is should be a very similar conversion.